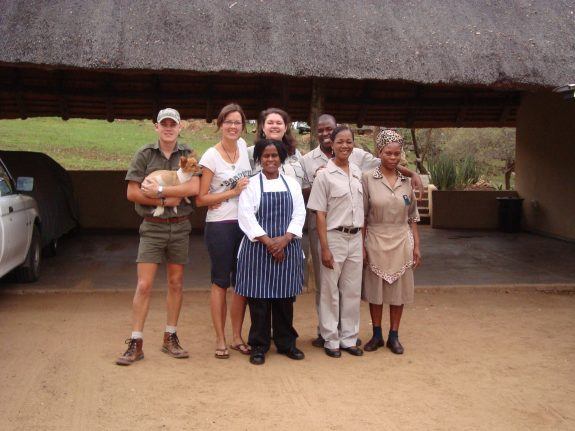 We began planning our Mpala Safari in 2008. One night, we had watched something on the telly and before we turned off the TV, we zapped through the channels.

On DK4 we saw a program about Mpala. About the place, the tours, how it was started and so on. We were very taken by what we saw and decided that we wanted to go.

We were convinced that it would be very expensive. I said that I would call you the next day and than my husband said. You can do that, but it will be too expensive for us – maybe 10.000-15.000 Euros for the two of us. I called and I’m so glad I did. We were both very surprised that it did not cost more than it did. We had some material about the tour sent to us and then we started to plan. We decided that we wanted to go in the autumn 2009. On September 27 we left. We had purchased a couple of extra days on the panorama Tour.

The flight for Johannesburg was awful. We went in the night and we actually didn’t sleep at all. When we arrived at Johannesburg, I told my husband that I was only going to take that flight once more – and that was for the trip home.

At the airport, we were met by a driver and then the tour started. We had not expected to see any wild animals until Kruger, but already at the first hotel where we stayed the night before the Panorama Tour, we saw an elephant as well as a hippo mother with a calf on land grazing. That was exciting because there were many signs in the area with warnings about how dangerous the hippos could be. The Panorama Tour was a trip into some beautiful mountains with some great views – unfortunately it was rather foggy so we did not see that much.

Monday we travelled to Mpala. When we arrived, all the staff was there to greet us. It was a very special experience and almost like royalty and a little moving, too. We had never tried that before. We were greeted and said hello to everyone with a hand shake. We asked when the other guests would arrive and was told that we were the only guests that week. But the service was in no way less exquisite because of that – on the contrary. Everything was just perfect. We had wonderful meals every single day. We went on some amazing trips where our ranger, John, was a great guide with an extensive knowledge about everything in the wild – and a good driver, too.

Late in the afternoon, we watched a wonderful and impressive tribal dance where some of the natives danced dressed in traditional attire. Two of their young and shy children finally started to dance and it was rather sweet.

One of the best experiences for my husband and me must have been the days in Kruger National Park. We saw the Big Five and all five on the same day! That was amazing. The leopard was something special, but it was even more impressive as it had dragged an impala up in the tree where it was lying. Ready for when he became hungry again. We also saw many other animals like zebras, impalas, kudus, monkeys, giraffes, lions and two hyenas, and that is not so common. Furthermore, we saw lots of birds and various types of deer.

We went into the bush driving on ATVs ourselves. John took us on some dangerous roads because we were the only ones and we had told him that we both are crazy about speed and engines. Sometimes, he went first to see whether it was possible to go there – so we drove on some exciting roads. We did not see that many animals apart from some impalas and a few giraffes. Instead, we took a break under a large and very beautiful baobab-tree, which is said to be app. 1600 years old – one of the oldest in South Africa.

The visit to the nearby school unfortunately had to be cancelled because of school holiday, but instead we visited a snake farm with many different snakes – both dangerous and not so much. We also saw a place where they raised leopards as the wild leopards in South Africa is threatened with extinction.

A drive into the bush at Mpala became a very exciting day because suddenly there were five elephants around our car. Two elephants in front of it, two behind it and one at our left side. They were very close to the car, especially the one on the side came so close that I could feel my adrenaline pumping. John kept his cool and just started the car and then the elephant went peacefully around us.

When we came home, there was a large herd of elephants on the opposite side of the river, but one of the large ones decided to cross the river but luckily did not went ashore on Mpala land – they are known for how much they can ruin. That we experienced one day we went for a drive. Not far from Mpala an elephant had turned over a small tree across the road so we had to remove it before we could drive on.

One night we had dinner in the boma (a closed area with barbecue and an open oven) and we had as usual a magnificent meal and had a good time together with the staff. All of a sudden, John could hear a leopard roar close by and later in the evening we heard a lion roar close by, too – it was definitely a very exciting day.

The chefs at Mpala could really serve some very exciting meals with meat from animals we never had imagined we would taste like zebra, kudu, and impala. Even in the middle of the bush they could produce the most delicious meals. Even in the bush, the table setting included a white table cloth and candles.

It was great fun getting up in the morning and watch the many baboons (monkeys) in the trees in front of the cottage. They ate nuts from the trees and made a mess with the shells. They were not especially afraid of us but they just sat looking at us. There was also quite a few warthogs grazing but they ran away when we came with their tales up in the air like small antennas.

On the way home we had chosen a trip to Soweto before the plane left South Africa. Here we saw some of the poorest parts of the country – the so-called townships. We also saw the present and former home of Nelson Mandela as well as where Desmond Tutu lived. Nelson Mandela’s former home has been turned into a museum, which we visited. It was extremely interesting to hear the story of this great personality told by a guide and see his former home.

As an ending to the holiday we were served champagne in the Mpala watchtower. Here we had a final talk with the staff. It was very sad to have to say goodbye after such a wonderful, exciting and interesting week. A single tear or two fell.

Do we want to go back? Yes we do, and we have already made a round trip in South Africa, but we are definitely coming back to Mpala. All those experiences are definitely worth the flight.

All the best, Arne & Kirsten Pedersen