Those were the words in the invitation we received.

We had for several years heard our parents didn’t want to celebrate their golden wedding with a party, but rather together with their closest family. The family of the golden wedding couple, their 2 children, 2 children in laws and 4 grandchildren of ages 8-18 years. And so the travel began….. 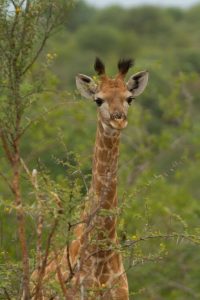 Already at the gravel road between the main road and Mpala the adventure started, with two fully grown giraffes, curiously while munching looking over the top of the trees. They had a baby giraf next to them.
One of the highlights, that specially the youngsters in the group had looked foreward to, was the ATV trip. Each driving their own ATV in the bush with the ranger in front. It is less how many animals you see on this trip because of the noise of the many ATV’s. Most of the animals quickly disappears before we see them. Giraffes though must have better nerves or worse hearing than other animals because they were plentiful. Three large giraffes walked in a single line on the road as if they owned the World, not caring about our presence. They had no intensions to clear the road for a group of motor thugs. While admiring them we discussed whether we could safely drive between their legs and when someone finally decided to give it a try they luckily decided to walk away from the road and continued into the bush.
After the ATV trip we came to Mpala’s Bush Camp. It is a place in the midle of the bush with a barbecue and a set tables for dinner. Just before arriving we were welcomed by a committee of 3 elephants, an elderly male and two teenage males stod quietly feeding. Even though the bush camp is in the midle of the bush it is well equipped with fresh water and a toilet with a fantastic view. The wash with fresh water was indeed needed to wash away the dust before the dinner, which was set at a beautiful table with white table cloth. We all looked like having had a failured spray tan after the bike trip on the ATV’s.

While we had the most delicious beef’s in the light from oil lamps the sun set and the stars emerged. Imagine sitting in the darkness and listening to the animal’s sounds and admiring the starry skye in a 30 degree celcius nice dry evening. So fantastic it was.
Even if there were no wind, one of the trees at the entrance started swinging from side to side. It was the oldest elephant from the welcoming committee. He would just remind us who rules the bush. Our two rangers immediately approached the elephant to show it off. While one of them tried to talk teh elephant to calm down, the other ranger was ready to fire a worning shot with his riffle, should things escalate. The rest of the staff at the camp led us to safety behind the bricked bar. From this pocition we could watch the trees from time to time move heavily. The rangers had everything under controll and it was an exiting experience that showed how we as humans are just visitors in the animals World. At no time we felt unsafe or scared as the rangers and the staff had the situation under control. The elephant’s “show” happily ended as they left the camp without any need for warning shots.

Another experience we had looked foreward to was the two days trip with an overnight stay in Kruger National Park. Already on our way to the official entrence gate we saw several cars that had stopped at the road side. We soon learned that this was a certain sign for something interesting beeing nearby. An quite right, a leopard was lying in a tree. Unfortuately it had chosen a branch with leafs so it was a bit difficult to see it, even when the ranger pointed it out for us where to look. But after looking carefully we all managed to se some of it’s spots. We were so impressed of how well camouflaged a leopard is. Kruger National Park is not stuffed with animals everywhere as you see it on TV. You can easily drive for 15 minutes without seing anything! But suddenly something happens again! 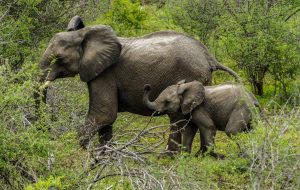 At one occationt we met a group of elephants about to cross the road. There were several grown up females and youngsters at different ages. The ranger slowed down. But the driver in a car behind us seemed to be in a hurry and overtook us in a speed. That agitated the elephants, specially the smallest, a 2 year young male still suggling at his mom. This small elephant was very unhappy with the drivers behavior and despite the elephants size it felt forced to give a demonstration who’s the boss in the park. It opened it’s ears widely and flickered them, trompetering the best he had learned. A bigger sister put her trunk around him and it calmed him down for a while. But after shortly the show went on.
Elephants show how big and dagerous they are by picking up branches and throw them onto their back. Our little friend would also show he was big and after several not so succesful attemps he managed to pick up a small twig and throw it onto his back. As we drove on he againwanted to demonstrate his brave and ran after us with flickering ears before returning back to mum. The ranger told us that such a small fellow with such a big self-confidence might become problems when it grow older. After a day filled with experiences we vere filled with impressions.
After a delicious barbeque dinner we were ready to get lost in our beds in our bungalows of the park.

Next morning started with driving through a rocky area in the Southern part of the park. On the way up the mountains we saw two klipspringers. They move around on the rocks walking on the tip of their hoves just as ballet dancers. On the top of moutain we could get out of the vehicles and caught sight of a large group of elephants at the bottom of the rocks. Small and large elephants were busy having breakfast. A fantastic sighting and we had plenty of time to enjoy it. 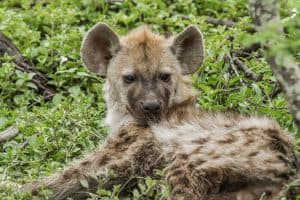 Down again we met a spotted hyena cup. It was lying and relaxing right next to the road. We had a feeling of fantastic experiences in a short time one after the other. Not long after these experiences we had new luck. Three groups of rhinos shortly after each other. One of the groups were so close we easily could see their large horns.

While we had these fantastic experiences in Kruger the staff at Mpala had been busy. They had made a great triumphal arch. (This is a Danish tradition celebrating wedding anniversaries) The arch of green leaves was raised around the room door of the chalet for the golden wedding couple. This was such a surprise and gave the golden bride tears in her eyes.  A trip to Mpala is not a relaxing holiday. Many days you are woken up at 4 or 5 am. But you need to get up early to get the best seeing the anmals waking up. In the evenings you fall tired asleep in your canopy bed, filled with fantastic experiences and great food. The rangers, Estel and the staff really does all they can to make you feel extremely well. The programme of the week is stuffed with experiences, but you also get time for a nice swim in the pool or relaxing on the terrasse with the view to the river and the animals coming to drink.

As we arrived to Mpala on the first day we were told that we come as guests but will be leaving as friends.
When we left the lodge 14 days later we fully understood what they meant. Best regards Connie Sørensen og family.

PS As you can see from the pictures the rangers managed to show us the Big 5 at least twice.